You are here: Home / Our Pastor 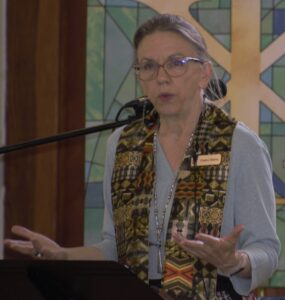 Blaine was born in Virginia but considers herself a New Mexican, having lived in Cedar Crest, Santa Fe, Philmont, and Albuquerque. During the years in Albuquerque she graduated from UNM, met and married Dick Wimberly, and both their children were born there. Blaine first attended a Methodist Church in Cimarron, and was active at Central in Albuquerque. Her first appointment was at Mesa View in Albuquerque.
Some would call Blaine a second-career pastor; she prefers to say that it took a long time (and some help) to discern and respond to the call to ordained ministry, and has picked up a wide variety of education and experience along the way. Blaine first began Course of Study at Duke, then felt called to seminary and returned to Duke Divinity full time. After graduating with her M.Div. she returned to the New Mexico Conference, serving a two point charge in West Texas. Most recently, Blaine served in Santa Fe at Zia UMC.
Blaine values the connectional system of the Methodist church and has served the district and conference through camp (as a counselor for elementary and youth camps, and most recently as dean of the conference music camp); as chair of the Albuquerque District missions committee; on New Church Development; by teaching at Lay speaker school and at License to Preach school; and is currently serving on the District Committee on Ordained Ministry.
Blaine’s husband Dick has always been an artist (painter and sculptor.) Their older son Hugh is a software engineer based in California (Bay area); second son Nigel is a potter and musician currently at school in New York, studying ceramics.
Blaine and Dick are delighted to be at Mountainside and looking forward to new ministry opportunities among new friends.

To be a thriving Christ-led people in the East Mountains, inviting all generations to a transforming experience of God’s Grace